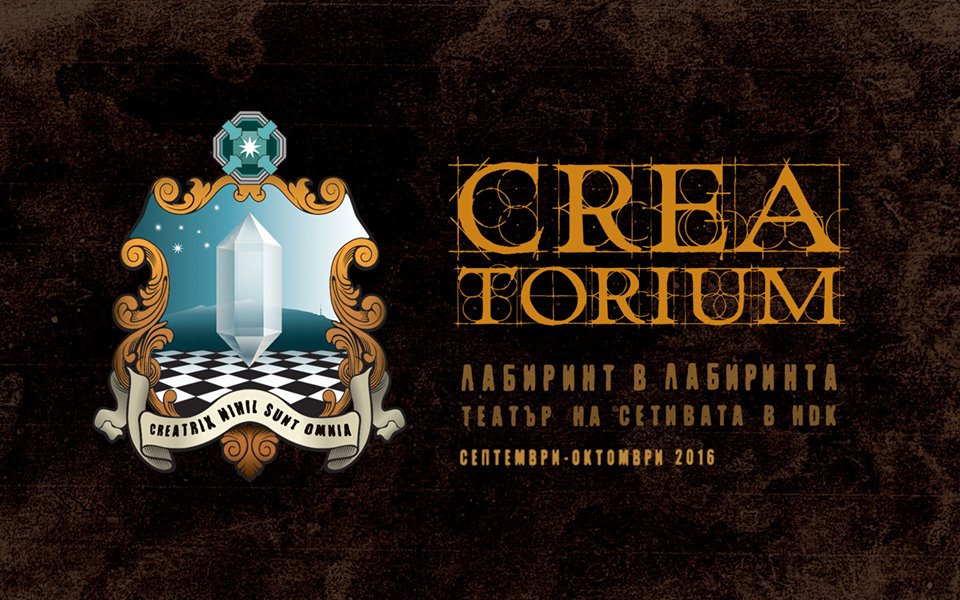 „CREATORIUM – LABYRINTH WITHIN A LABYRINTH”

Sensory Theatre Sofia and the National Palace of Culture (NDK)

„CREATORIUM – LABYRINTH WITHIN A LABYRINTH”

March – October 2016 at the National Palace of Culture (NDK)

„A person lost in a labyrinth finds a door. When he opens the door and steps forward, he falls into… another labyrinth – further still from his starting point and closer now to the moment of losing oneself completely, a moment pregnant with so many possibilities…”

CREAtorium is a labyrinth of CREATION and RE-CREATION.

In CREAtorium you enter further into darkness and light. This is a show about losing and finding yourself again within the heart of a Universe of infinite possibilities. In this sense CREAtorium creates the conditions for a quantum leap and rebirth within the eternal present. HERE and NOW.

Deeply breathe in. Now breathe out…

Are you ready for this journey?

„CREATORIUM – LABYRINTH WITHIN A LABYRINTH” is the title of the new show of Sensory Theatre Sofia, a co-production with the National Palace of Culture and Informbureau Association. This is the most extensive project for the sensory theatre in Bulgaria so far. There will be performances between March and June 2016.

„It was scary, and sad, and inspiring, and reviving!”

„A journey toward the universe within oneself.”

These are a few of the feedback messages from 1200 people who passed through the labyrinth.

The project was financed by Sofia municipality “Culture” Program for 2016.

Within the project there have been trainings and consultations with Listen Up and Synergia Foundations, working with people with impaired hearing and vision.